All Articles Ocean Freight Containers: One of The Most Important Inventions of Our Time?

Ocean Freight Containers: One of The Most Important Inventions of Our Time?

The Ocean Freight Container is a huge component of international trade, and has been an extremely important aspect of how cargo transportation has taken shape through the years.  In the most recent decade, the volume of global ocean going cargo reached more than 8 billion tons.  This fact, coupled with an annual average growth rate in this respect of 3 percent proves that the Steel Shipping Container was an invention to be reckoned with.

The Box and Economics: A Key Factor

Roughly 16 percent of global freight exports originating from more than 200 countries were bound for the United States, and of that amount, almost 60 percent was oceanborne cargo, in other words, carried by Ocean Freight Containers.  The United States is the world’s largest economy and leading importing nation, accounting for almost 25 percent of global gross domestic product.  A large percentage of GDP is carried by Ocean Cargo so a significant amount world trade hinges on the utilization of these Corten Steel Shipping Containers.  It’s numbers like this that stress the importance of the Ocean Freight Container and how much of an impact it’s had on the global economy and many other aspects of our lives. 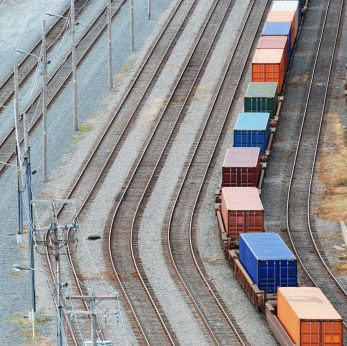 Since the 21st century began, almost 90 percent of non-bulk cargo on a global basis is moved by Ocean Freight Containers stacked on steamships.  The sheer dominance of the container has had a ripple effect in other areas of not only cargo transport, but industry standards as well.  For example, there were four main recommendations by the ISO (International Standardization Organization) that were internationally accepted:

After these main components were set in stone, other areas of general freight economics were affected.  Trucking and other intermodal methods had to conform to these standards, specifically as determined by these four primary recommendations defined by the ISO.  Flatbed dimensions, width and height changed per these new standards.  The way that products were packed; pallets and boxes – basically everything with regards to cargo fell within these set of guidelines to help improve cost and productivity.  It was so much faster and more organized to load and unload cargo that the cost of loading freight was reduced by more than 90%.  Therefore, the cost of products you buy or sell were reduced greatly because of the ISO Shipping Container.  Containerization has revolutionized international cargo transportation, bringing substantial improvements in general efficiency.

An American Made Change

Malcolm Mclean may not have realized the difference he was making in the lives of human beings when he came up with the idea for the Shipping Container in 1956, but the invention was most definitely pre-meditated.  After watching, for 20 years, the slow and inefficient method of carrying, loading and unloading cargo, Mclean finally decided the industry needed a change.  He came up with the idea that a specific unit was needed that conformed to a standard the world would recognize.   So, the man born in Maxton, North Carolina was not only an American Entrepreneur but later became known as the father of Containerization and named the Man of the Century for his invention of the Ocean Freight Container.